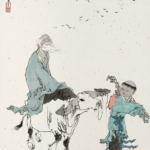 A story about how people can be Omens.

A friend, who always calls before showing up, randomly knocked on my door, paranoid about the Corona situation, about how he has to immediately leave Dharamshala and be back in the states.
He has a Rahu-Moon conjunction in his 4th rash along with his 4th cusp.
He tried to make me paranoid as well about the situation by bringing up various ongoing issues and conjuring up stories about the possible food shortages. He seemed baffled and confused and overwhelmed.
He is a very Rahu personality - not paranoid as such but creates emotional confusions that does not allow him to see things clearly.

I was writing a mail about Rahu and Ketu and their history to a teacher. The knock on the door interrupted the flow.
He is a friend, so Mercury (I was researching and writing a Mail, engaged in a Mercurial activity), but an extremely Rahu personality, he is also running his Saturn-Moon Dasha.

At that point I realised that the work I am doing, the mail I am writing is fruitless effort and I am only creating more paranoia and confusion regarding what is more simple. My feeling was that Rahu has showed up at my doorstep to interrupt and stop the fruitless effort, it wants me to see something more about it. (my mail was about how Rahu is confusion and how little we know about Rahu).

I finished writing the extensive mail, sent it, and then as expected, the reply was - I have already done this research, but what you must look into is the most overlooked aspect about Rahu, that is an avatar with full Paramatma consciousness, that is, it does not have a Jiva portion.

Essentially, what the Omen had communicated was that you are being paranoid and causing confusion, and that you must look into what we already know from Parashara's sutras rather than engaging in confusing works of scholars (who do not have any astrological understanding), also that Rahu can lead to full consciousness about something, (through obsessive-ness about a subject, or other Rahu-like behaviors and compulsive curiosities).

My friend immediately left for the states, mid-March.
(Most of his paranoia came true. He actually foresaw, he seemed disturbed, but later was glad that he was paranoid and did not get stuck in Dharamshala where there was and sort of has been a lack of stable internet, electricity, water (not food), and cash at ATMs.)

India closed its borders. Cancelled all the flights. He was glad.
My doubts were cleared as well right on the day my friend arrived in the states.

Thus, interrupting my confusions, creating paranoia, me finishing my confused mail,
as he reached home, and my confusion about Rahu found its way back home to clarity as well.

Yes, omens or signs come to us all the time, and we interact with them all the time subconsciously. Sometimes we follow the guidance, sometimes our ego gets in the way and we don’t. The guidance could come through a tangible sign or an intangible one, a spoken word or a written one, it could come from an old person or a baby, from any gender and any religion, it is everywhere. It is when we start seeing them consciously is when the fun starts.

Reading signs for yourself is one thing, but one needs to be grounded and connected to the other person when we start reading for others, without having our ego or our emotions or our life situation get in the way, and without forcing our thoughts and beliefs on them. A ball game at a very different level.

Indeed. Well-said. A very different ball game. You either get it or you don't.

Venus, the Kavi, is required along with of course Saturn, the patient simplist, and Mercury, the meta-analyst.

You either get it or you don't.

No, it’s not that. Everyone can do it. Anyone can do it. It’s the case of letting go of the ego and what we think we know. That is what comes in the way. I always have trouble with that.