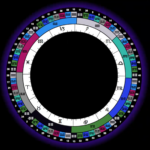 I suspect to get to the bottom of this will require looking at the horoscopes of other riots. Thank you for your input, Mirela.

I would also examine the chart for when the arrest that started all this happened. That's when this started.

Ah of course! Luckily there is time-video footage of exactly when things happened to the second.

Ooh boy look at this chart, huh? The Ascendant is Sagittarius, and its lord is debilitated. Who are the authorities in this case? I guess we could say 10th house. Which would make that lord Mercury. And Mercury is closely conjunct Rahu in the 7th house. Hmm...

There was a really ominous omen that occurred in April of this year that very loudly pointed to all this happening. Martial Law, blacks, police, and something historic happening. I'll make a separate topic for that omen.

I was looking at the Birth Card spread for Minneapolis for the time you mentioned Mirela, and it runs a Jack as it´s Ecliptic card, pointing out thefirst three periods - March 1 to Aug 3 - as especially important this year. Right now it´s running it´s Moon card, being King of Spades, the toughest card of them all when it comes to going through hardship, killing ego, changing identity etc. It´s lagna Lord falls there; what´s shown to the world, and for sure, the world is looking on and this will lead to a deep identity crisis, this doesn´t go with the "Minnesota nice" concept at all. Rahu is there, working in a rather contrary way - 4 of Spades; security in self, rest, recuperation. A very "non Rahu" energy - I guess that represents the police force fighting in a no mature way to establish a deceitful security. All this given that the hour of foundation is correct, of course.

I had written about it in my notes, sharing it here:

Venus, Jupiter and Saturn are retrograde. So they are powerful. If we look at the dignities, Saturn has the highest dignity + is retrograde. Jupiter has lowest dignity + is retrograde. This could mean that the time is good for things concerning Saturn while things concerning Jupiter would be disappointing. Saturn rules masses and people who are oppressed, it gives more power to them. Venus is conjunct Sun but is retrograde(so not combust) and is with friend Mercury in Mercury's own sign. Also looking at dignities Venus has more dignity than Sun so Venus has more power than Sun. What makes this conjunction dramatic is Sun and Venus are mutual enemies. Sun stands for ruler ship and authority while Venus stands for equality and diplomacy. Looking at the avastha Venus(Lajjitadi/ashamed and Kshobhita/agitated), it does suffer but still has more power. Also, the incident that happened indicates debilitated Jupiter which is low morality and righteousness. In the nutshell astrologically, the event happened could be explained as: the human rights getting violated (Venus ashamed and agitated) by leadership/law and order (Sun aspected by Mars) due to low moral values and conscience(debilitated Jupiter) leading to the protests by the oppressed(Saturn).